Home » SysAdmin » How to List Installed Packages on Ubuntu

Having a list of installed packages helps system administrators maintain, replicate, and reinstall systems. Linux based systems install dependencies all the time, hence it is essential to know what is on the system.

In this tutorial, learn how to list all installed packages with apt and dpkg, save the list to a file or list specific packages and versions. 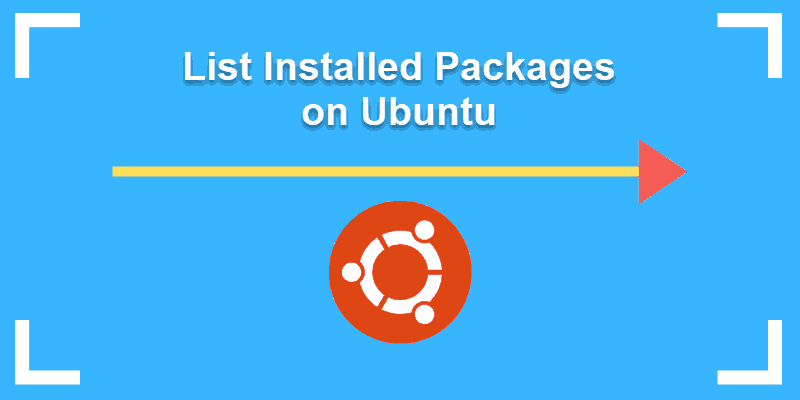 Start by opening the terminal. To generate a list of all installed packages:

Upon executing, the output will display all installed software packages, including versions and architecture. It will also list all packages installed as dependencies.

The image below is the type of output you can expect to see. 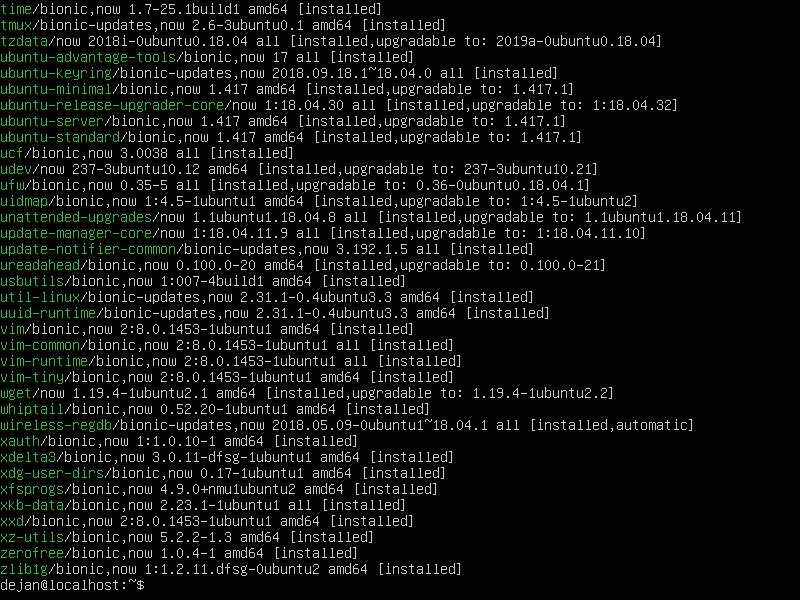 For most users, the list will be a long one. Try piping the output using less.

The output will be an easily manageable list of installed software packages. Use the up and down arrow keys to scroll up and down. 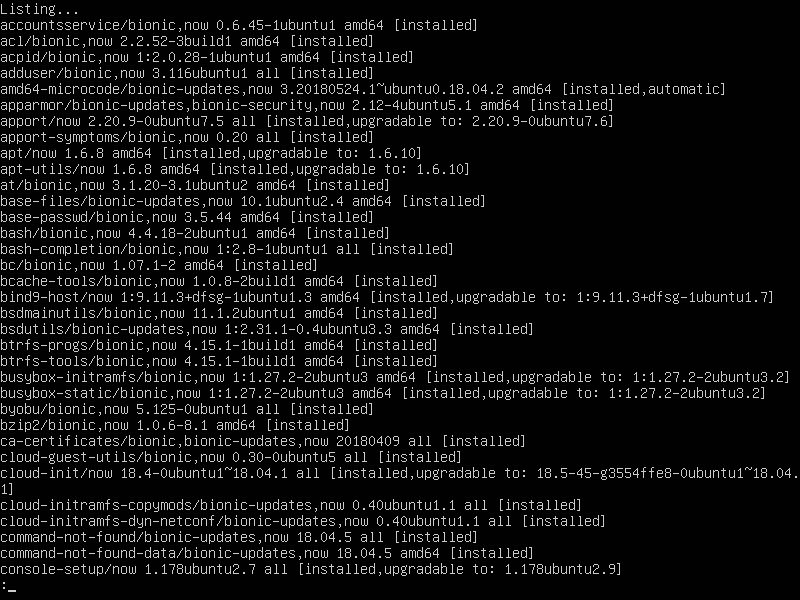 To get a list of a specific software package and its respective details, type the following in the terminal:

Instead of package_name, type the name of the software package you want to look up.

Use the apt show command to view details of a specific installed package.

To check which packages may be updated, use the apt list command with the upgradable flag. Pipe the command with less for easy navigation.

Once the system executes the command, the output will display all upgradable packages. Furthermore, it will display details, such as the installed version and the latest version available.

If using less, press Q to return to the command line.

To list all versions of a package, execute the following command:

The system will present all the available package versions in a repository. This is a repository-wide search. You will get results even for packages that have not been installed on your system.

Let us consider the sample output below.

Candidate indicates the latest version available. In our example, we can update the udev package to version 237-3ubuntu10.21.

Version Table indicates which versions are available and in which repository.

Systems running older versions of Ubuntu might not have the apt tool. However, an alternative solution is to use dpkg commands.

Open your terminal window and type:

You do not need to run these commands as a superuser. Hence, there is no need to invoke sudo. Both apt and apt-get use dpkg commands so this is a viable method even on the latest versions of Ubuntu.

The output should display details such as package name, version, architecture, and a short description. The image below represents the type of output you can expect. 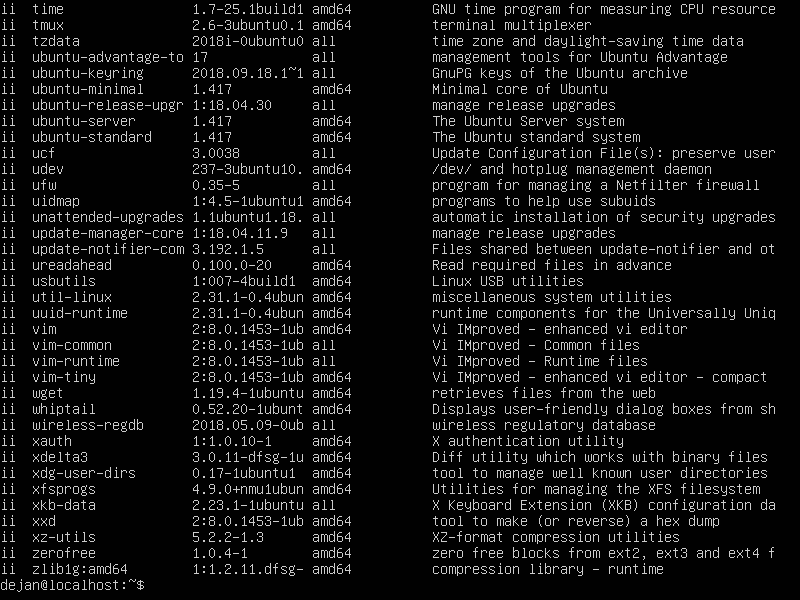 As with apt, you can pipe the results with less to generate a smaller and more manageable output.

You can also use the grep command to filter out a specific package.

Instead of package_name, type the name of a specific software package.

Having a list of all installed packages is helpful when you want to create identical systems.

To export the list and save it to a file, run the command:

Note: all_packages_list.txt is the name of the saved file. You can define any file name you opt for, as long as you retain the .txt file extension.

The total number of installed packages is another useful piece of information.

To view the total number of installed packages, use the following command:

All of the above options will display packages installed with the apt and dpkg package managers. However, Snap packages are not available with the commands mentioned above.

To get a list of all Snaps installed on Ubuntu, type:

Note: Learn about the differences between Snap packaging system and the APT package manager in Snap vs Apt.

By following this guide, you should have learned how to list installed packages on Ubuntu and other Debian-based systems.

The instructions provide answers to filtering specific installed packages, counting all installed packages, and listing upgradeable packages. Now you can move on to learning how to list information about directories and files with 19 Crucial Linux ls Commands.

Dejan Tucakov
Dejan is the Head of Content at phoenixNAP with over 7 years of experience in Web publishing and technical writing. Prior to joining PNAP, he was Chief Editor of several websites striving to advocate for emerging technologies. He is dedicated to simplifying complex notions and providing meaningful insight into data center and cloud technology.
Next you should read
SysAdmin
How to use apt Package Manager on Ubuntu Linux
In Linux, special tools were developed for managing applications. Application software for Linux typically...
Read more
SysAdmin
How to Use The APT-GET Command In Linux
Advanced Package Tool (APT) is a package management system used on Debian, Ubuntu and other Linux...
Read more
SysAdmin Web Servers
How to List Installed Packages on CentOS with Yum or RPM
Managing a CentOS operating system often means knowing the software packages that are installed. This list...
Read more
DevOps and Development SysAdmin
How to Uninstall or Remove Software Packages From Ubuntu
This guide will walk you through several methods for removing old or unwanted software from Ubuntu Linux...
Read more
© 2021 Copyright phoenixNAP | Global IT Services. All Rights Reserved.