What is a LAMP Stack?

Home » SysAdmin » What is a LAMP Stack?

The term LAMP stack was coined by Michael Kunze in 1998 and has been used as the foundation for Linux hosted websites ever since.

In this article, you will learn what the LAMP stack is, its components, and how it works. 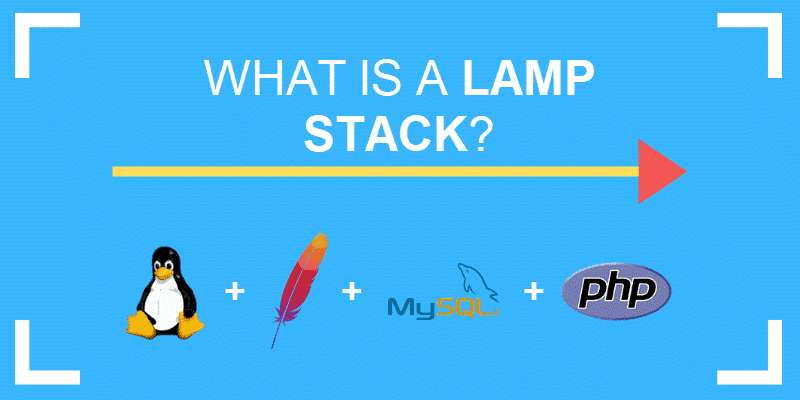 What is a Stack?

The term stack (derived from “solution stack”) refers to a collection of different software programs that “stack” together to create a platform necessary to support application software.

These independent subsystems work together to make up a fully functional environment so that no additional software is needed for an application to work.

What is the LAMP Stack?

For a web application to work smoothly, it has to include an operating system, a web server, a database, and a programming language. The name LAMP is an acronym of the following programs:

Each represents an essential layer of the stack, and together they can create a database-driven and dynamic website.

The illustration below can help visualize how the layers stack together:

Linux is the operating system layer and the backbone of the LAMP stack.

All the other components of the stack run on top of this foundation. You can efficiently manage the rest of the stack components on different operating systems such as Windows, macOS, and others. However, Linux has become the front-runner for web development not just because it is open-source, but also due to its flexibility, customization and easy to use technology.

Also, the programming language and database management used in developing a website may dictate the platform you choose to build it on. PHP and MySQL are better suited for Linux. On the other hand, SQL, ASP.NET, and ASP work more efficiently on Windows.

Apache HTTP Server is a web server software that runs on top of the Linux operating system.

It is the most widely used server, powering more than half of the websites on the internet. The role of the web server is to process requests and transmit information through the internet, using HTTP.

An alternative to Apache is NGINX, a web server whose popularity has been continually increasing since 2008. Whether you go for one or the other depends on what kind of material you want to serve on a webpage, as well as the hosting.

NGINX is a better choice for static content. When it comes to dynamic content, there is a minor difference in performance between the two. Also, Apache is commonly used by shared hosting users, whereas NGINX is mainly used for virtual private servers, dedicated hosting or cluster containers.

Note: SQL (Structured Query Language) is the most prevalent query language out there. A query is what we call a request for information or data stored in your database table.

MySQL earned its reputation as an acclaimed database system as it supports SQL and relational tables. By doing so, it makes it much easier to establish dynamic enterprise-level databases.

Consider MySQL if you:

Another relational database management system that can be part of the LAMP platform is MariaDB. Both are quite similar, and MariaDB claims to be completely compatible with MySQL, allowing users to transfer their database without any complications or losses. Deciding between the two comes down to whether you feel more comfortable storing data with a large corporation (MySQL under the direction of Oracle Corp) or a completely open source solution (MariaDB).

PHP (Hypertext Preprocessor) is a programming language which has the role of combining all the elements of the LAMP stack and allowing the website or web application to run efficiently. In short, when a visitor opens the webpage, the server processes the PHP commands and sends the results to the visitor’s browser.

PHP is the fourth layer of the original stack because it interacts exceptionally well with MySQL. It is commonly used for web development because it is a dynamically typed language, making it fast and easy to work with. This feature may be especially appealing if you are a beginner. The reason why PHP is so convenient to use is that it can be embedded into HTML enabling to jump in and out of it as you wish.

In the LAMP stack, the P can also refer to two other programming languages – Perl or Python. All three are simple, yet useful, dynamic tools for creating environments in which you can successfully develop applications. Nowadays, there is a wide variety of scripting languages to choose from, including JavaScript, Ruby, and many more.

Advantages of a LAMP Stack

While non-open source alternatives include:

After reading this article, you should have an understanding of what the LAMP stack is.

Whether you choose to go with the original four FOSS software or an alternative stack is entirely up to available resources and knowledge. If you are interested in an alternative, there is also a MEAN stack. Learn how LAMP vs MEAN compare.